Spaichingen/New York – What the Fifth Avenue means for fashion- and artfreaks , 57th Street in New York is for the fans of music: a traditional place for special meetings, because Carnegie Hall, probably the most famous concert hall in the New World is located in  57th Street. Even Vladimir Horowitz  celebrated legendary triumphs there, some of which have been recorded in the television.

For his recital in the fully booked chamber music salon of the Carnegie Hall the Australian pianist Gil Sullivan selected the new pianoforte „Concert 275“ from the Swabian Pianoforte Manufacturer Sauter, which contains some special technical innovations. In the treble area the string terminations are made of titanium, which is  superior to the traditional steel for conducting sound.

Additionally, the Sauter Concert 275 is the only piano in the world with an adjustable treble duplex. This allows omitting of  the usual felt string braid  to absorb  impure tones. Both measures, along with exclusive, selected materials and excellent finishing lead to an exceptional  transparent and nuanced sound, which is becoming more and more appreciated in the world. The piano manufacturer Sauter has more than doubled its production to satisfy the demand for this hand-made instrument. Stefan Schnitzer, Director of  Development and Manufacturing at Sauter: Of course are we very proud of this success in the market, but the increase in capacity is done under strict control to ensure the quality standard „Handmade in Germany“ is met.

Gil Sullivan, who took lessons with Murray Perahia and Paul Badura-Skoda, had prepared himself for a very challanging program, which started with Mozart`s variations on „Unser dummer Pöbel meint“ and culminated in Beethovens piano sonata c-minor op. 111. From his classical-romantical repertoire the Australian pianist  interpreted the polonaises A-major and f#-minor by Chopin and the sixth Hungrian Rhapsody by Liszt. The US-premiere of a Mazurka composed by Julian Cochran aroused great attention. The young composer  flew in from Australia to attend the concert.

After the Beethoven  sonata  the audience was already enchanted and thanked the artist with a standing ovation. The „275“ made a solid impression. On one hand it was powerful and  rich in timbre in the bass, on the other hand its treble was fascinating, especially in the pianissimo playing of the composition „Brownhill Creek in Spring“ by Miriam Hyde. The delicate but substantial sound projected without difficulty to the last rows of the standing room of the fully occupied hall. Upon the audience's  insistence,  of Sullivan offered two encores, before he closed  the fallboard with deliberation, which – mechanically attenuated – smoothly lowered itself. 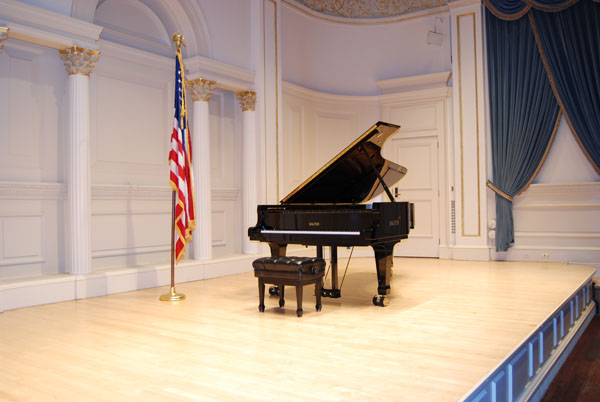